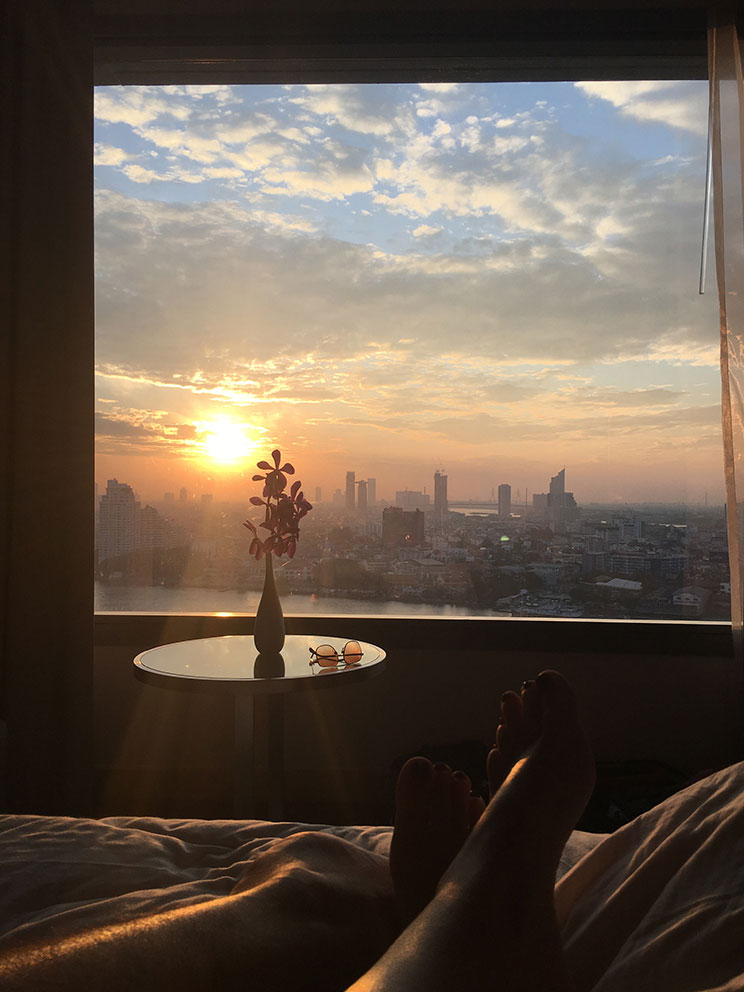 Our last stop of the little Tour de Asia was Bangkok. Thankfully FrauK. had already taken care of a fancy hotel and so we had a nice hub for those last three days to start our excursions through Bangkok. Rooftop pool and bar were included and we had the most amazing breakfast – a mix of traditional asian and european dishes. #yummieness A hint for all the first timers in BKK – if you get a place by the river, you can escape the traffic and craziness of the city for a relaxed sleep at night, without being far away from the hustle and bustle. The first thing I’d already spotted at the airport and on our way to the city were the large number of condolence messages for the thai king who had passed away in 2016. I knew that there is a national mourning for one year, but I didn’t expect it in such a visible way. This was very impressive for me as an European. So the King hadn’t just been the longest reigning head of state worldwide, but also the most loved OG in Thailand. May his majesty rest in peace.

Just having 3 days in a gigantic city, it was not supposed to be all about graff. I wanted to get an impression of what this amazing place is like. So we started to discover the jungle of Bangkok by boat, skytrain and tuktuk – don’t take the first price, it’s about negotiating here – and had a look at some tourist spots, beautiful temples, huge malls, fake markets and ended up … in a graffiti store. My plan was to paint a piece at a Hall of Fame with CIDER from the MSK and so I had to get some material. But keep in mind that Asia doesn’t mean cheap all the time. Because of the import taxes a european can at the BKK GRAFF store is between 7 to 9 Euros. But a man’s gotta do, what a man’s gotta do ? Another hint from my personal experience: the security guys won’t let you take your cans on public transportation like the sky train – also discussions don’t help here, but just attract more security. But they’ll return the money you’ve paid for the ticket and you have to find a taxi or tuktuk rather than letting you hop on the train with 10 cans. #lessonlearned

In the end I had a pretty relaxed day with CIDER, his homeboys and the boys from the BKK GRAFF store who took great care of my with icecold drinks in 35°C and almost no shade. A Hall of Fame in the middle of BKK, I mean right where all the action happens, is a pretty cool place. And my lady was able to escape for shopping and food adventures.

Bangkok is a pretty exciting city and you’ll definitely need some time to discover this place. But you’ll see quickly that tourism is a big priority here and like everywhere else on our beautiful planet it is not so easy to find the original Bangkok. And a good thing: you’ll always feel save, no matter what time of the day. If you think that you’ll be able to have a quite and romantic evening at the rooftop bar from “HANGOVER” at the Lebua State Tower with a relaxed drink, you’ll be surprised by masses of tourists enjoying the amazing view with you. Also the famous Khao San Road is pretty entertaining and you should’ve seen this crazy place at least once, but it can also be quite stressful after a super relaxed stay at those thai islands. But hey – all good in the hood. We’ve had an amazing time in BKK with plenty of great things we discovered and Asia definitely got me. I’ll be back!