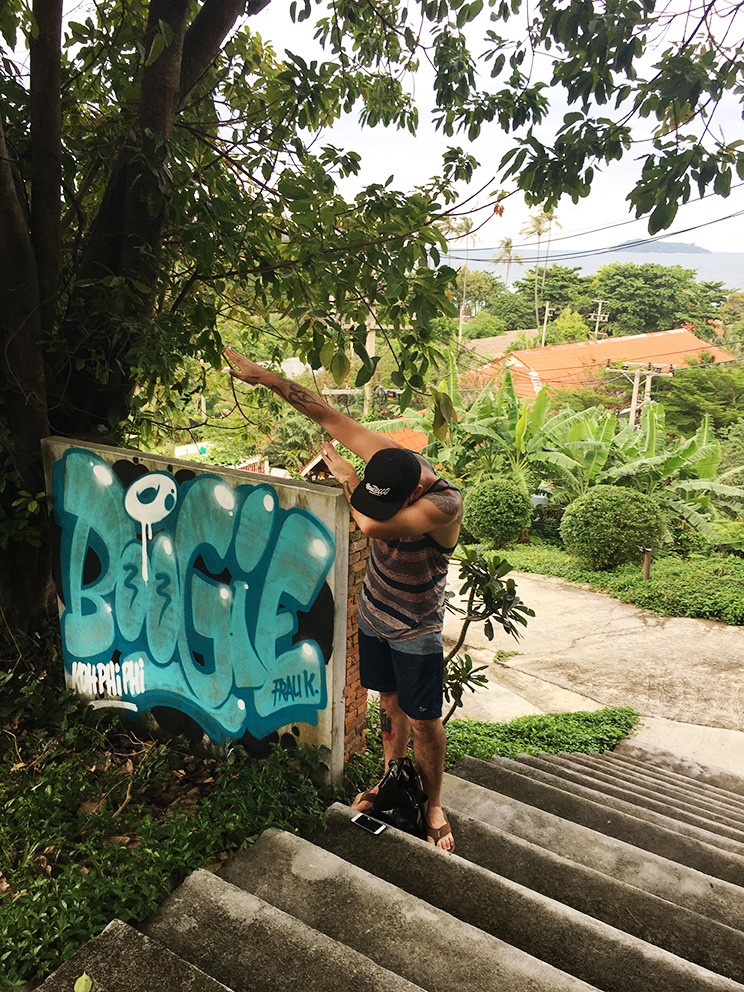 After two weeks of graffiti tourism, action, the flue and a lack of sleep, it was time to relax a little with my lady. So we decided to do a four stop island hopping tour in Thailand – I guess we just had a little FOMO here. We flew out to the tourist hub Phuket and left right away with a speedboat to Koh Yao Yai – a small and very original island in the southwest of Thailand. I didn’t have to worry about the quality of any of our accomodations, because I knew that Frau K. would take care of that part – she’s the one finding the most stylish but also affordable places with great food and the best beaches. So we had quite the view and breakfast by the beach with wild monkeys running around the hotel property. We were quite stoked.

I was still on my #tourdeasia and so I started to look around the beautiful island to find a spot to paint. After all the DISTRICT guys from Kuala Lumpur had given me some advice on how to get some cans to Phuket on the plane. And I was successful with this plan, so that it was time for the first ever graffiti on the island of Koh Yao Yai. Kinda cool, I guess. For four days we discovered the island by motorbike, drove from one beach to the next, had amazing food, watched monkeys riding on goats and for the first time in a while we had the feeling to be relaxed as f*ck.

But there was still that mission I had to fulfill: to bring some color on a wall! So we started to look around in those small villages with the friendliest locals and decided to just spontaniously ask the owner of the wall I liked best, if I could paint there. The first try was successful and a young lady almost begged to paint the newly renovated wall of her little fashion shop. This is what I call quick business. I started to do my thing and after a while a couple of neighbors stopped by and turned out to be quite the fans of my art – even though they hadn’t seen graff live before. All of a sudden I could’ve painted a loooot of walls – even a school. I just loved the welcoming way those people acted. Seeing those smiles was amazing.

For us it was time to move on, because Koh Phi Phi Don was calling. We were a little shocked at first after a little over an hour on a speedboat. Wow – lots of tourists. But we left for our hotel which was at Laem Tong Beach and more lonely. Good for us. On this island we definitely saw some of the most beautiful beaches which I had ever seen in my life. Nature is such a beauty. Especially being an early bird was worth it, when we took the longtail boat at 6 am one morning to visit the famous Maya Bay. We didn’t wanna feel like visiting a public swimming pool. So we arrived a little before 7am and it was empty and breathtaking, but 15 minutes later the first speedboats arrived with a couple of „The Beach“ tourists. But what can you do about that?! Everybody wants to have their selfie and money makes the world go round. In my eyes a bit to much tourism in what they call a national park. Anyways – discovering the two Phi Phi islands was dope and they are beautiful.

But didn’t I forget something? Yes – I almost forgot it in my chillaxed state of mind. I had some leftover cans which were enough for a small piece. And all of the sudden my lady told me that she had discovered a little wall. So it was our last afternoon on Koh Phi Phi Don and I took my cans, painted a quick one and gone I was! All those mosquitos and bugs – even using NoBite – started to attack me in the bushes. One last dip in the ocean and it was almost time to say good bye again.

Taking a ferry, another ferry and a taxi and we were back in Phuket. But we were not here to stay. It was time to leave for our final island called Samui. After a short flight in northeastern direction, we arrived on this quite huge island compared to what we had seen before. This island had two contrary sides to it – lots of party tourists in the north on one hand and the more relaxed and layed back south. We went to the more original and calm south – time to check into our beautiful apartment. I’ve never been a spa person, but that was something I really learned to enjoy – massages for days!

If there is one advice when renting a motorbike on Koh Samui – get a helmet on your beautiful heads, because those streets are definitely busy and quite steep. After some sightseeing with waterfalls, unbelievably beautiful temples and a 7 course Christmas dinner in a treehouse, my mind kept on drifting back to this small store in Chaweng. When we took a taxi after our arrival, I had spotted a store with a rack of cans. TOA SPRAY is the local player and I guess getting used to those cans takes some time. But beggars can’t be choosers, so that I picked a up two sixpacks and tried my luck at what seemed a legal spot with a good photo option. And again the mosquitos made me go fast on my second to last mission. Koh Samui: Check! Great time: Check! Relaxed: Check!