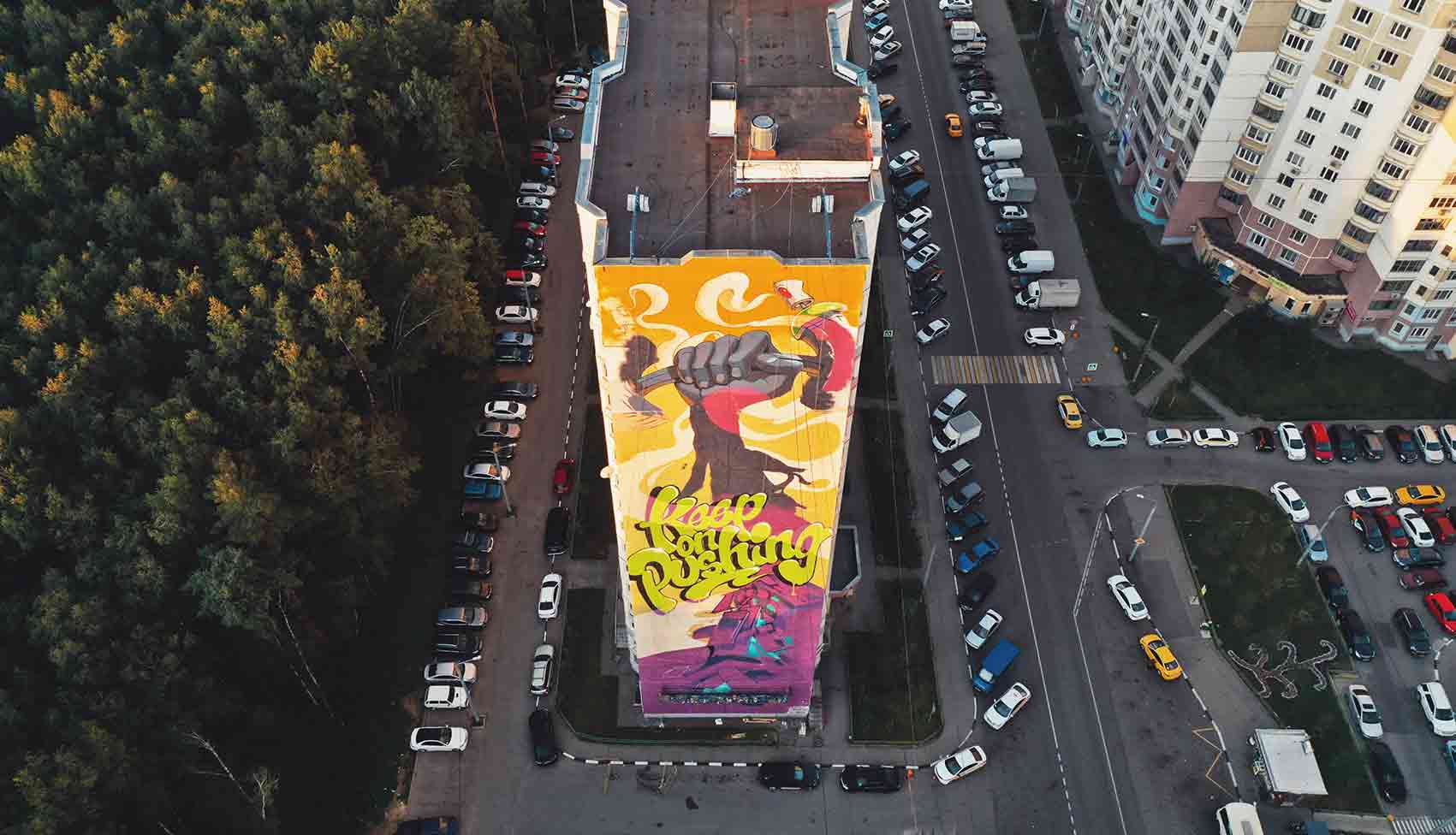 Russia has attracted me a lot and during the last years I used almost every chance to go there when I`ve got an invitation to the formally known Sovjet Union. One reason is maybe cause I was growing up in the Eastern part of Germany (the formally known GDR) and we learned a lot about this country in school when I was young.

This time the guys of the URBAN MORPHOGENESIS Mural Festival in Odintsovo – around 1 hour away from Moscow – asked me to be part of it. They planned to invite artists from all over the world to paint 36 huge murals in the neighbourhood.  Each of the walls between 60 and 70 Meters high (180 – 210ft).  WTF?! So I couldn`t miss this chance. But I was not shure if I would be able to manage this mega project completely as a OneMan Show. So I asked my buddies HEAT and TRANS from Budapest to be part of my team. These guys are real pros and know what they do. HEAT is a fantastic character painter and illustrator. TRANS is a stylewriter but his style divides completely from mine cause he is more into graphic elements and straight lines. This combo seemed really interesting to me. Another fact was that we harmonize pretty well in the human way.

We were really fast in finding an idea for the wall: KEEP ON PUSHING should be written in huge letters. Trans should do the lower part of the wall with lots of graphic elements which morphes into a big hand with a barbell. Instead of discs there should be two huge spraycans. Heat should do the hand with the barbell. The message behind this concept is pretty simple and transferable to almost each situation in life: Don`t give up! Forward! Exceed the limits!

Arrived in Russia we were faced fast with the hard reality: the imagination of logistics how we maybe know it from other countries, that everything works exactly in time was flatten really fast. Waiting was the theme. Waiting, watinig, waiting. I am just honest in what I felt and I was really upset cause time was running really fast. So I have to say THANK YOU to Heat, Trans and all the other artists for pushing each other into a good mood. But I also have to say that I don`t want to imagine what it means to subdue such a big group of artists and manage a huge project like this.  The only thing which was always sitting in our neck was the fucking time. At all we planned around 9 days of painting for the mural and day after day elapsed with doing nothing cause there was always something really important missing. To  extend our stay was also no option cause there was no chance to get a new Visa so fast.

But hey: No hard feelings! The day was coming when we finally got everything to start. And when this engine is running, then it runs really well. It was probably one of the best teamworks I ever had in my career with these two crazy Hungarian Superheroes. If felt like we would work together since a very long time and could read about eachones thoughts.

To bring our sketch proportional to the wall we decided to use a projector. On this size of wall it was not the easiest way. But anyhow we made it and at least we could do a really rough sketch to see the size ratios. After that we filled up all the big spaces. God saves the airless. This saves lots of dust, money and time cause all of us finally wanted to work with OUR tool: the spraycan.

To paint outlines on this format is …. let`s call it special. Imagine the P of PUSHING is around 8 Meters (24ft) high.

So we worked day after day and if it was 30, 40 or 60Meters height – it was not a really problem anymore. The only thing was: when you are sitting on the toilet and the room starts to move a bit cause you`ve been the whole day on the lift.

We had to fight hard against the time to finish the whole wall and unfortunately in the end we did not have the chance to add all these details we wanted to put in if we would have 3 or 4 more days. In the end we are super happy that we made it and gave this giant a little facelift.

As more time we spent in the city of Odintsovo we were more and more getting to know this neighbourhood. And to kill all rumors: No ghetto and no drunken Russians everywhere you go. Instead of this it was a pretty nice hood with interested people who have been very helpful and brought us beers, icecream and snacks. As well I want to say THANK YOU to the organizer Dmitrij Levochkin and his team for making this adventure possible. Even if here and there have been some sand in the the Russian gears – you did an amazing job and created something really big.

Not to forget all the artists who pushed it to the limit each by himself.