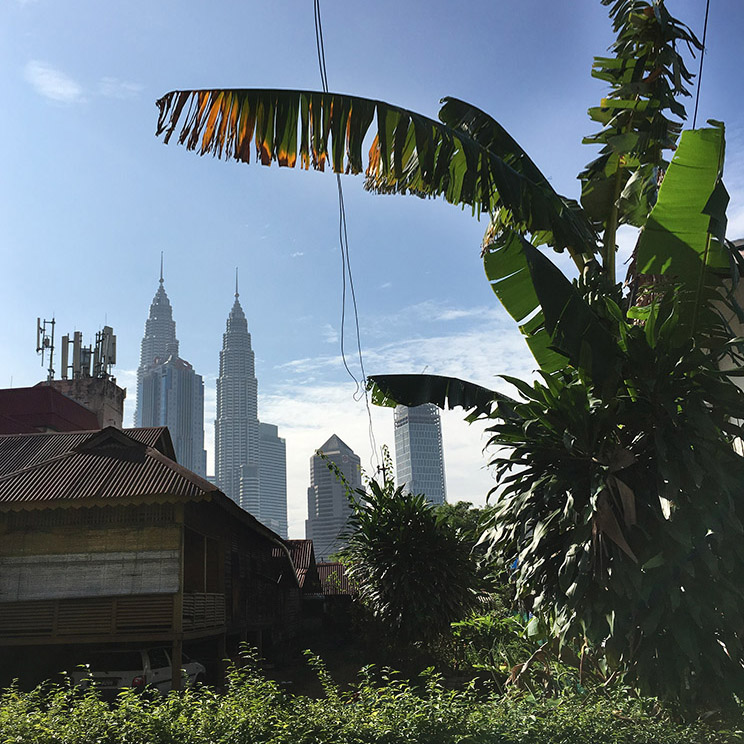 Selamat siang Kuala Lumpur! After one big ass goodbye party with the GARDUHOUSE POSSE I had mixed feelings leaving for the malayan capital Kuala Lumpur the next morning. On one hand I was sad to leave Jakarta, but on the other hand I was definitely looking forward to see the guys of the DISTRICT SHOPGALLERY around my boys Katun and Bee again, who I got to know 2 years ago during the ONO’U TAHITI. Those two guys became friends and now they had invited NILKO WHITE and myself to join them for a visit in their hood. I was really thrilled that it all worked out and that we had the chance to go. So this was the second asian country on my list.

Bee picked us up at the airport of KL and we went straight to his shop (DISTRICT) to meet the rest of the crew. I’ve already had the chance to meet some of them in Jakarta and now it was time for a highfive with the rest of the guys. I felt home immediately, because everybody was so open and genuinely welcoming! We sketched, hung out, had food, sketched, had more food and trash talked the night away. After days of just painting they were amazing hosts and decided that it was time for a tourist day for us before hitting the walls again. So the next day we spent discovering Kuala Lumpur, had the real malaysian deal of food and visited the Batu Caves and Hindu Temple. A gigantic 42m high golden statue of Murugan and lots of pretty hungry macaques (little monkeys) greeted us. Man, those smart little guys try to steal your food and not just your food. At night there was another get together and dinner – those malaysians are a hungry bunch who love to eat, let me tell you – and hung out at the shop which is also the place to get together like a second home of those lovely guys. It got late once again and after a short night at the 43rd floor of the Berjaya Times Square hotel which was just a short stroll away from the graff HQ, we started painting the first huge wall production at KL’s bigges hall of fame by the canal with some of the longest walls evers. This is also the location for Meeting of Styles Malaysia. So we decided that I’d paint a Boogie style with a crazy monkey characters on each side from my homeboys KATUN and NILKO. And around us the rest of the PHOBIAKLIK – THE crew from KL – started to let their magic happen. Oh yeah, we had an amazing time.

Unfortunately my flu came back mixed with some stomach problems – yeah, I guess I’m just such a tourist. My motivation was still top, but my energy level went low. But I was fighting my inner temptation to stay in bed, because I wanted to paint the second wall so badly. With 36°C heat – yes, I am German and not used to heat – and feeling shitty I started painting. Our local friends helped out with young fresh coconut against the fever, different funky local pills for my tummy and a great portion of motivation which have all kept me going. And it was still an amazing day and I had a lot of fun painting this wall. But I was not done – I wanted to paint a shutter in the city. I didn’t take much at all to convince my friend Katun to come with me. So we found a little streetspot in the centre of KL and did our thing – right during rush hour. Because our malaysian buddies are always hungry, we went for a late dinner after that.

But sometimes you have to accept that you need to take a breakt for your body. So I decided that I had to take a day off after almost two weeks of painting. No easy decision, but yeah … guess I’m getting old. On the other hand I wanted to get rid of all those evil virus stuff in my body, because my love Frau K. was about to arrive in KL to continue this trip through Asia with me. So my schedule for the next day read something like this: sleep, tea, sleep, more sleep, picking up my lady from the airport and a welcome dinner with her and the whole crew. I started feeling better and so the two of us did the tourist thing. We went to Chinatown, different temples, strolled through neighborhoods, went to the KL Tower, checked out some of the famous markets with fake products like Casio X-Shock, Yeezys and AirMax in colors you’ve never seen bevor and had an amazing time. We hung out with the DISTRICT-Gang and our funny frenchie friends Niklo and Ben who had joined us in KL for a timeout from life in general.

Time was running once again and the goodbye came closer and closer. I just know that we’ll see each other again which made saying “Selamat tinggal!” not too hard. I just can’t thank you guys enough – you’ve welcomed us into your families, showed us your KL, took care of me when I was not in best shape and you gave us a chance to learn so much about your culture. This is from the bottom of my heart: Terima kasih, my friends! Your are the best.

Next stop: Island Hopping in Thailand with Frau K.